Happy Tuesday!  I'm using the schedule post feature for the first time, so hopefully this is going to be published at least on the right day.

Yesterday, I started The Nighttime Novelist and although I'm only a few chapters into it, I really like it.  I just finished the part about plotting and it struck me that story ideas can really come in three different  ways for me.

The first is the obstacle course.  This form of idea is when you get the story problem.  Like : Boy wakes up with no memory of who he is.  He finds himself in an all boys compound in the middle of a shifting maze.  (The Maze Runner by James Dashner.)  For me, this is the most common form of idea. 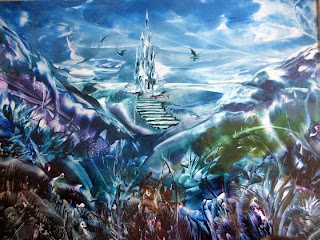 Then there's the landscape, where the setting is the first thing you see.  I didn't really understand that people could get a story idea from an interesting setting until I got the idea for "The Other World."  This is still nothing but an idea, but basically it takes place in a world where the space between thought and action is much thinner. Right now, there's no characters and no problems, just a setting.  I think a lot of Dystopian novels started out this way, like Delirium and Uglies.

And then there's what I call the Enchanting Eyes, where a character or cast of characters stumble into your mind without knocking and you just feel like you have to tell their stories.  This is my favorite idea shape because normally a problem is not far behind a character.  Here's an example: Alex's parents died when he was small and then, when he was fourteen his uncle died in what he is told was a car crash.   Then he finds his uncle's car with bullet holes in it and learns there was more to his uncle then met the eyes. (Alex Rider by Anthony Horowitz.)  Characters are -- in my opinion -- the most important aspect in a story and so I love it when they're the first thing to come to your brain's doorstep.
What about you?  What's your favorite form of idea?  Do you have one that I don't mention here?
Email ThisBlogThis!Share to TwitterShare to FacebookShare to Pinterest
. . . . . . . . . Written by Unknown at 8:00 AM

Comments are awesome, rudeness is not. 'Nough said.