The Wonders of Word Wars 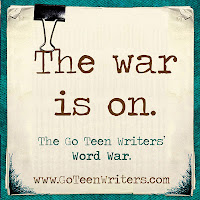 A week ago, I woke up Monday morning to find this post on one of my favorite teen writer blogs.  It announced the opening of five day word war between who wanted to participate.  Being the crazy, masochistic that I am, I immediately started writing.  My original goal was to write 10,000 words in the five days.  But after day two, when I'd already cranked out 5,000 with an average of 2,500 a day, I shot for higher.  12,500.  I thought I could make it.

Wednesday I was still going strong with 7,500 K under my belt.  But then Thursday struck.  Last Thursday, I got up, went out an bought some summer clothes I seriously needed, (Not really.  But they're really cute.) then I came home for a few hours, which I spent working on all things VBS, before heading back into town for a VBS meeting.  I got home at 10:00, very tiered from a long meeting and generally busy day.  And I decided to go to bed.  With zero, 0, words.

This inspired me to go back through my writing and crunch some numbers.  From very early on in my writing I've kept a spread sheet that tallies how many words I write each day that I actually write.  I was six thousand words into my fist novel when I started keeping track.

Here's some stats for ya'll:

My first novel took my roughly ninety days of writing to write, but those ninety days were spread out over three years.  The most I wrote during that novel was an even 3000 words the day before I finished it.  That novel was finished on a Tuesday.  On average, I wrote about 511 words each time I sat down to write.  The first draft was complete at 46,000 words.

My second novel was written mostly during NaNoWriMo and Camp NaNoWriMo.  It took me 85 days of actual writing to write, spread out over five and a half months.  The most I wrote in one day was 3468, four days before I finished it.  I finished it on a Wednesday.  I wrote an average of 1153 words per writing day.  The first draft was complete at 98,000 words, double my first manuscript.

That catches us up manuscript number three.  I'm writing this post on Saturday and as of now, me from the past hasn't finished the novel yet.  I'm REALLY SERIOUSLY close to the end of this novel.  In fact, I hope to finish it today.  I've spent about 35 days writing this novel, spread out over two months.  My best day was yesterday with 4,338 words.  Like I said, I think this is two days before I finish the novel.  I've written about 1,090 words per day. The novel will end up being about 40 thousand words, which is about 15K longer than what I thought it would be.

All in all, this most has just made me realize how much I've grown as a writer.  It took me over three months to reach 12K in my first novel, 7 days to reach it in my second novel, and 5 now.  If you had told me three years ago that I would one day be able to write 12K in five days, 4K in one, I would have laughed you out of the room.

So, how have you seen yourself grow as a novelist?  For me, completing a novel, even a short one, in less then three months is huge.  What about you?  Comments make me happy.  Drop one, if you feel like it.  Also, do a five day long word war with a large group of people.  You might just surprise yourself.

Alright.  Inklined and its author are officially joining the world of Twitter.  I've only had an account for a few hours, but I'm feeling a bit lost already.
If you have any advice, comments, helpful twitter hints, to general ways to help me understand this thing, please leave them in the comments.
You can follow me @SarahFaulknr.  Drop me a comment and I might follow you back!

Please Just Stop--Knowing when Enough is Enough in your Series

There are few things in the world of reading worse then books and series that go on too long.  We've seen this in TV.  Shows that are continued not because they're good or fresh anymore, but because they're still making some money.  You know what I'm talking about.

But I think it's sad when this goes on too long.  Wouldn't you rather see a series end leaving you wanting more then one that's dragged on so long you almost want to give up on it.  The characters have been so developed, there's no room left.  The plot twists that were so great in the first two or three books and starting to feel old and worn out by book 9.

Now, there are two types of series in my opinion when it comes to books.

The first is a series that has an over-all plot.  It's a series made for the sake of telling a good story that just happens to be too long to fit in one volume.  I'm talking about series like Harry Potter, Percy Jackson, and A Series of Unfortunate Event.  If you read just one of these books, you would feel drawn to the rest of the series.  It's more than just the sum of its books.

Then there are books like the Nancy Drew Series.  Great books in themselves, but there's no overarching plot-line.  It's simply a bunch of books following the same characters.  You could read any one book and not be confused.  You could read them out of order.  It really doesn't matter.

And I really don't hate either or these types of series.  My first two novels were in plot arc type of series.  My current novel is a new series where each book could be a stand alone.  But what makes me really sad is when a book crosses from the first type of series into the second.

The example I'm going to use is The Ranger's Apprentice series by John Flanagan.  Please don't hear me say I don't like this series.  I do.  HOWEVER.  It has made me sad and frustrated for a few months now.

John Flanagan wrote an excellent novel that could have been a stand-alone in The Ruins of Gorlin.  Great book.  Witty, cute, funny.  Promising.

And then he continued the character development and growth in Burning Bridge through Battle of Scandia.  It could have been the end.  Should have been, some might even dare to say.  But it wasn't.  Flanagan followed up with his first four books with a roughly two year jump to Sorcerer of the North and Siege of Macindaw.  I'm glad for this, because Socerer just so happens to be my favorite of the books.

But then, he really could have stopped.  The hinted romance of the book had been fulfilled.  The boy we met and fell in love with in the first book had developed into a man.  Flanagan didn't stop, though.  Instead, we jumped back in time with Eric's Ransom, a stand alone.  Then we jumped forward in time for The Kings of Clomel and Halt's Peril, two books that were tied together, not stand-alones.  Then, we ended (or so we all thought) with book 10, The Emperor of Nihon-Ja, another stand alone with all the same characters we met in book one.  Now both romances are well and truly cleared up, along with a third thrown in for luck.  And John Flanagan went on record saying he's always wanted to write a 10 book series and now he was done.

I was glad.  While I liked the characters still, the last four, especially the last three, books had lacked the depth that made the first 6 so great.  I was excited to see how Flanagan would filter his creative talent into a new set of characters for me to fall in love with.  He did this really well with the Brotherband Chronicles.  Yeah!  I gobbled them up.  Great books set in the same world with a few of the same characters.  Perfect!

And then Flanagan released book 11.  I was a little mystified, but it was a collection of short stories.  Great! A different thing with characters I loved.  Fine.

And that's the last I thought of my slight frustration with this elongated series.  Until I stumbled across a Ranger's Apprentice cover I didn't recognize.  That's right.  Book 12 , the Royal Ranger, will be released November 5th.

It might be great.  It might be the best book yet.  And I'll probably read the book.  But really?  I'll be a little sorry that this series didn't stop earlier, that it didn't leave a little more room for my imagination to be left to its own devices to continue the characters I've loved into new worlds and stories.  So yes, Will Treaty's story will be told completely.

But this means that there will be no room left for me to bring myself into the story.  I'm really worried that I won't be able to add myself to the story and add futures to these characters.  Their entire lives are told.  Period.  End of sentence.  No need for reader imaginations here.  And in my opinion, if you can't add anything to the story, what's the point in reading it?

Wow.  This is a seriously long post.  Sorry 'bout that.  This is my word to authors everywhere.  If you made these brilliant characters once, you can do it again.  And we can't wait for you to bring us another set of people for us to fall in love with.  Don't be afraid to start something new.

What do you think?  Are there some series that were cut a little too short?  Or your personal pet peeves of all the series that went on a book or two too long?  Leave me a comment and let me know.

P.S.  I didn't have to look up any of the Ranger Apprentice titles.  Am I the only one who finds that a little sad?  More proof that I eat, sleep and breath books.

Maybe you've heard, or maybe you haven't, but there's a quote about writing.  After some digging, I still haven't found an author to attribute it to or the actual quote; but it goes something like this:


You must write one million words of (yuckyness) before you can write well.

While I know this isn't exactly true, this quote has always sort of stuck out to me.  Every time I feel like quitting, every time I'm ready stop writing a story and do normal people things like homework, I remember this quote.  Of course I'm not very good yet.  I've only written 20 thousand words or 50, or 75.  But if you count short stories, started but not finished novels, my current work in progress, and my two completed novels, I'm at 200 thousand words now.  I'm 20% of the way there!  For me, this is very exciting.  Like, so exciting that it makes me want to write 50 more thousand right now and bring it up to an even 1/4.

Also, if you're in need of some inspiration, here's an awesome Youtube song!  I'm a big fan of this song right now.  I've listened to it over and over.  I thought some of you might like it too!  Unfortunately, blogger decided to be stupid and not let me embed the video on my blog, so here's a link to the video.

Have a great writing week!