It is a truth universally acknowledged that a writer in possession of a good imagination must be in love with Pinterest.  My own realization of this truth led me to thinking, "What if writers tried to take over Pinterest for a night?"
This led to the birth of an idea: The Pin It Challenge

Pin 50 writing related pins on Pinterest in 30 minutes. That's a pin every 36 seconds, if you were wondering.

To inspire writers, promote their websites, and take over Pinterest!

Starting at 7:00 PM ET on Saturday August 30th, pick your own personal writing board to increase by 50 pins in as short a time as possible.  Record the number of pins already pinned and then start pinning.  Don’t stop pinning until you’ve added 50 pins to your board.
Pins may come from anywhere, other boards, outside websites, or your own hard drive.
Pins that count toward the challenge may be any type of content you find relevant to writing, including but not limited to these: quotes on writing, writing how-to articles, writing inspiration, book covers, setting and character inspiration, ect.
If you pin 50 new pins in 30 minutes or less, you complete the Pin It Challenge!

At 6:59 PM ET, pin the Pin It Challenge Accepted image onto your challenge board.  Once you’ve reached the 50th pin, add the Pinned it Image to your board and/or tweet about your success using the hashtag #PinItChallenge.
If you’re joining the challenge be sure to add your writing related Pinterest board to the link up below!

Help Spread the Pin It Challenge:

All of these are totally option, the only things required to participate is a Pinterest account and an internet connection.
• Pin the Pin-It-Challenge Images on one or more of your writing boards
• Tweet about the Challenge using the hashtag #PinItChallenge
• Write your own blog post spreading the word about this challenge

I so hope you get to join the challenge!  If you write a blog post about it, I'd love if it you'd leave the link to your post in the comments!  Don't forget to add your Pinterest board to the link up!

Happy Inspiration Thursday.  I thought I would take a break from the music videos and go with a quote.  Sometimes I think about what makes a good character.  And I don't mean that in the interesting character sort of way. I mean a character that is truly working for the side of light.  Here's the quote that's inspiring me today:


What did you think of the quote? What is your character? What about the 'character' of your characters? Do you find it inspiring? What's inspiring you right now? Leave a comment and let me know. Also, I'd love to see some of the things at inspire you. Tweet me a link to your post, leave the link in the comments, or get my attention in some other way! And be sure to use the Inspiration Thursday picture in your post!

What is a Street Team?

A little over a year ago I signed up for something, and then completely forgot about it until a few weeks later, then an author emailed me with an offer that would ensure me more than a few free e-books.  Maybe you know what I'm talking about, but I sure didn't until a year ago! 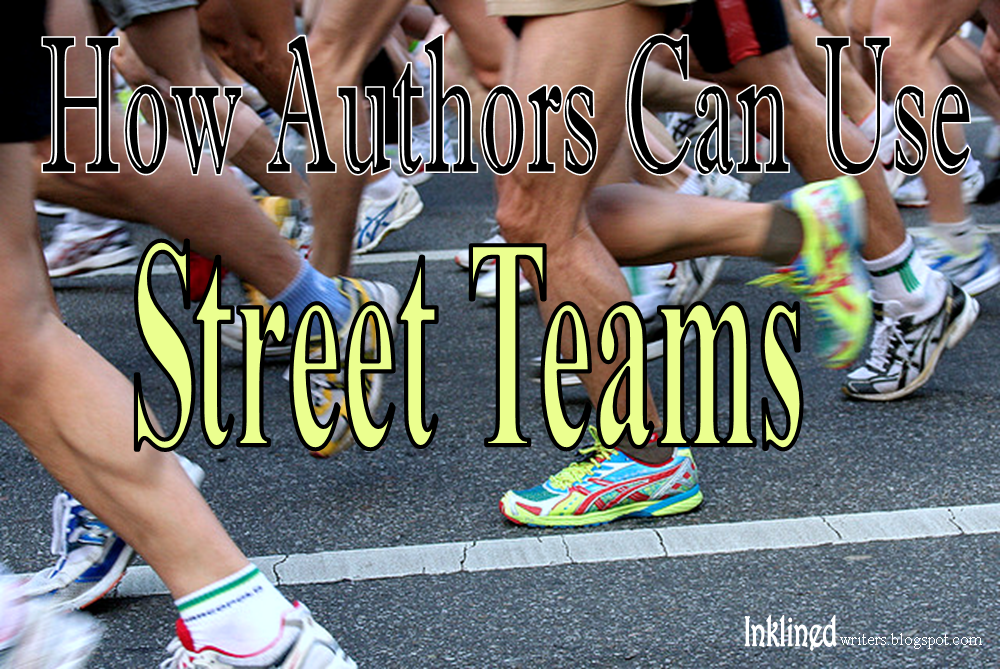 A street team is a group of people you recruit to help you spread the word about your novel. Ideally your team would be bloggers or vloggers, and also active on Twitter and Goodreads.

So here's how it works.

1. You recruit people.
2. You give them free books.
3. They help you promote your book by writing reviews, blogging about your book, and tweeting about you and any giveaways you're hosting.

Street teams are a great resource to have, especially if you're self-publishing or using an independent publisher with limited promotion opportunities.

Here are some things I would stress when looking for street teams or thinking about applying to a street team.
When picking street team members, browse their Goodreads shelves, see what they say about books similar to you on their blog.
When applying to a street team, take the time to read about the author and make sure you will love the book you are offering to promote.
Remember, quality over quantity. It's better to be a devoted member on two street teams, than an inefficient member on seven. Just like it would be better to have four great street teem members than twelve mediocre ones.
Are you looking for street team members who will promote you as an author, your stand alone book, or a five-book series?  Communicating the time commitment will really help members understand what they're getting into.
Tell your street team members what you expect from them. Do you want them to mention you in a Tweet once a week?  Write reviews for all of the books you send them?  If you communicate what you expect from them before they apply, you'll have happier, better equipped street team members.
Sometimes, we readers get sick and tired of reading YA romance disguised as dystopian.  We may have joined your street team when we loved your genre, and now we're ready to move on. Every so often, (I would recommend 4-6 months) ask your street team if they'd like to continue receiving novels from you.  You may lose members, but you'll keep the best ones.

That's all I have for today! Thanks for reading. If you have any questions, leave them in the comments!

Every little girl loves princess and princes, right?  Well, I like to think I've grown up a little since then. My current obsessions are Kings and Queens.

What did you think of the song? Do you find it inspiring?  What's inspiring you right now? Leave a comment and let me know. Also, I'd love to see some of the things at inspire you. Tweet me a link to  your post, leave the link in the comments, or get my attention in some other way!  And be sure to use the Inspiration Thursday picture in your post!

P.S. I'm sad because my senior year of high-school started yesterday. It seems like there is still so much of high-school left, but at the same time, so little.

Have a great week and see you Monday! 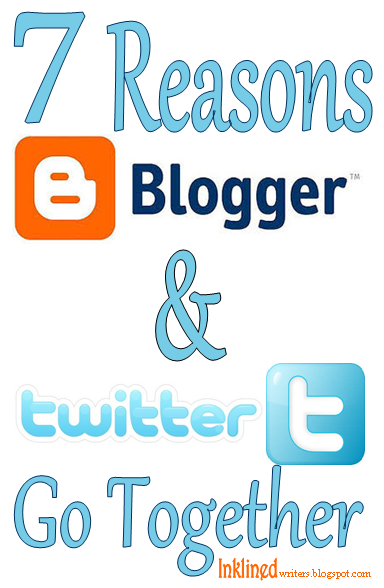 A few weeks ago, I wrote a blog post as a letter to past me. If you want to read it, click here. Spoiler: One of the things I said in the post was that I wished I'd joined Twitter sooner. (Let's pretend for a minute that my hoards of adoring commenters all asked for me to expound on that statement. This did not actually happen, but it makes me sound cooler.) Because of the hoards of adoreing commenters asking for a follow up post to that statement, here are 7 Reasons Bloggers and Writers Should be on Twitter.

1.  Twitter is a great place to connect with readers!
On the rare occasion that one of you deem my blog post good enough to tweet about, it makes my day!  It makes me want to flip back-flips (but unfortunately I spent my childhood reading, not on the tumbling mat.) If you join twitter and start tweeting about your blog, you'll be surprised how many pageviews you get from those two or three tweets. In the past month, I've gotten at about 30 hits from Twitter, or about one a day. That may not sound like much, but you never know the difference one reader can make.

2. Everyone is semi-equal on Twitter.
While yes, Twitter accounts like JK Rowling's probably get more hits on a daily basis than I do, if I send a tweet to Rowling, it shows up on her account the same way it would it she sent a tweet to me. We don't have to be friends. We don't have to know each other at all outside of Twitter. It's wonderful.

3. Twitter can be a good marketing tool if and when you publish that book.
If you read this blog, chances are you plan on becoming a published author at some point in the future.  Twitter, in my opinion, is one of the best ways you can advertise your book!  And if you get to understand confusing things like hashtags and Retweets now, when it's time to start promoting your book on Twitter, you'll be all the more ready.

4. Twitter is a good place to met and engage with bloggers you look up to.
Two bloggers I really look up to are Cait from The Notebook Sisters and Stephanie Morrill from Go Teen Writers. Bother of these writers probably knew of my before Twitter, but I really feel like connecting with them on Twitter helped strengthen my relationship with them.

5. Twitter is a great platform to show your support for authors and start getting to know them.
Say you have an authors that you look up to.  Maybe you even think they'd be the type of author to read your first book and write that glowing comment publishers seem to love smattering over the back cover of books nowadays. If you start promoting and interacting with that author now, they might have a more friendly idea of who you are. They might even tweet about you one day!

6. Twitter is not as time consuming as many other social media sites.
I don't know about you, but between Pinterest, YouTube, and Facebook, I can spend a lot of time on social media.  But while I love Twitter, I find it harder to get sucked in.  Maybe it's the unique interaction of 140 characters, combined with Favorites, Retweets, and Hashtages, but Twitter seems like it was built for people in a time crunch!  You can easily spend on 10 minutes a day on Twitter and still have a lot of interaction and fun!

7. Twitter is Fantastic!
And that leads me to my last point, that Twitter is just plain fun!  Even if you only spend 10 minutes a day on Twitter, you can learn the lingo, get to know and connect with some of your favorite authors, and give shout outs to bloggers you admire.  Twitter is fantastic, and all around, I see no reason not to join!


Do you have a Twitter account?  Are you going to get one now?  Either way I'd love to see the link to your twitter in the comments. It would be my honor to follow you.